Visit the lively city of Manchester, UK, and it’s not long before you start to see the bees– seriously, those things are everywhere.  There’s no need to panic-pack the antihistamine though: the bees aren’t buzzing through the air but inked onto the locals’ skin.

You might barely notice when the worker at Manchester Airport’s train station handing over your train ticket shows a forearm stamped with a bee motif, or the coffee shop cashier returning your change reveals a yellow and black bee on her inner wrist. 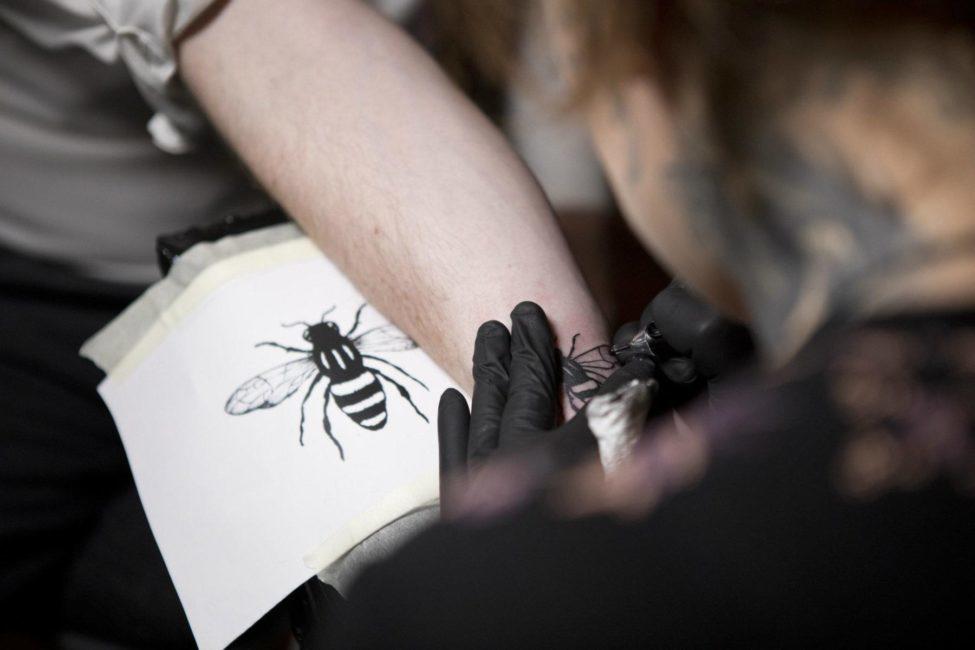 Give it a few hours though, and you’ll have clocked onto the fact that countless locals have the distinctive tattoo etched somewhere on their body. They come in all shapes and sizes, but all the bees are essentially the same design–not a cutesy, fluffy bumble bee, but a somewhat fierce-looking worker bee. What’s with that? Is it some kind of secret Mancunian society? Some of the bees are small, discreet and monochrome. Others are big, bold, and have bright yellow stripes. Still others have a date inked next to them: May 22, 2017. It’s this date that provides a clue to the powerful meaning behind the ubiquitous tats.

A date etched forever on Manchester’s collective memory, May 22, 2017, was the night of the horrific terror attack that killed 22 and injured many more children, teens, and adults as they attended an Ariana Grande concert at Manchester Arena.In the weeks following the attack, Manchester tattoo parlors began offering the bee tattoo for an affordable price, with all proceeds given to the families of victims of the attack. 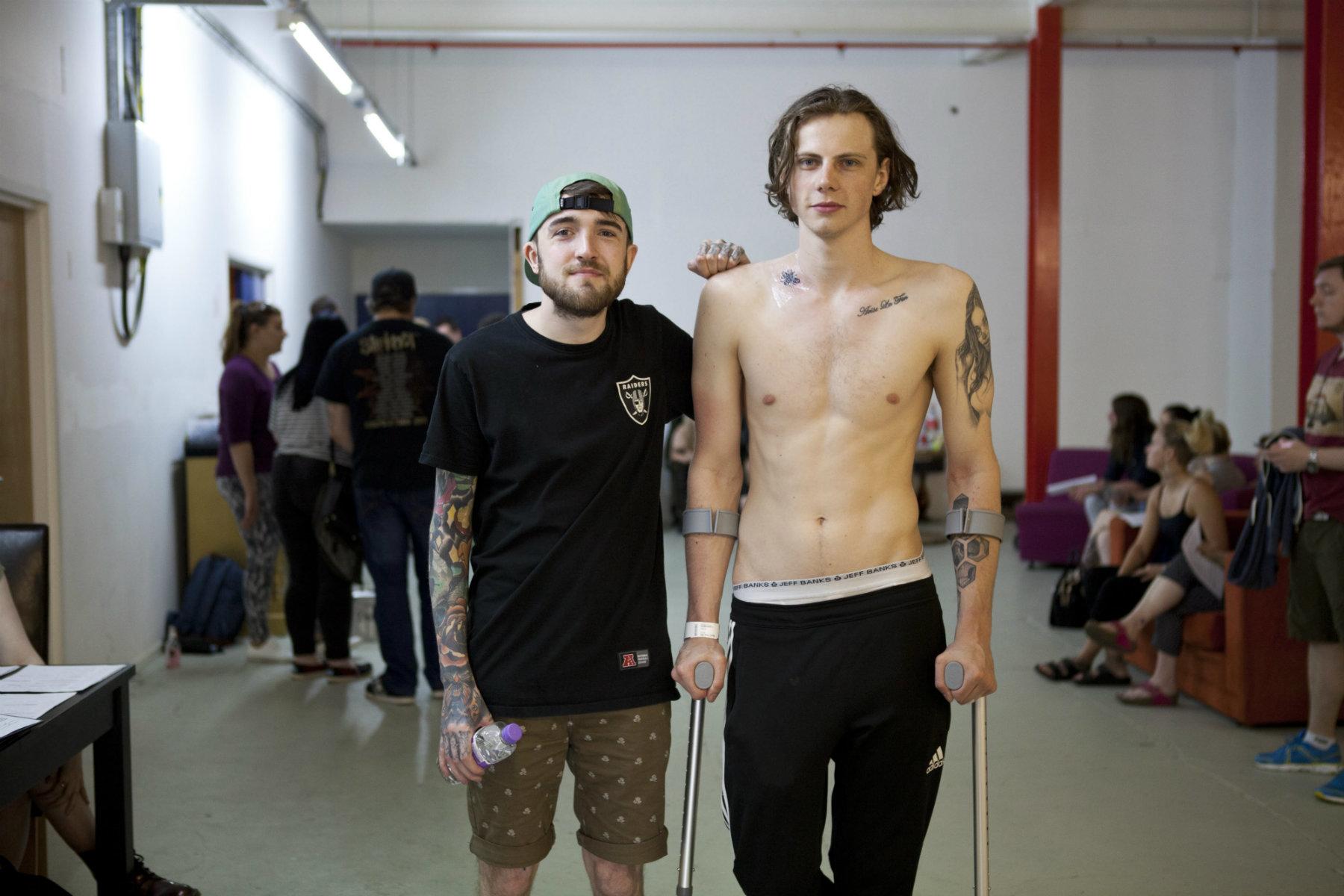 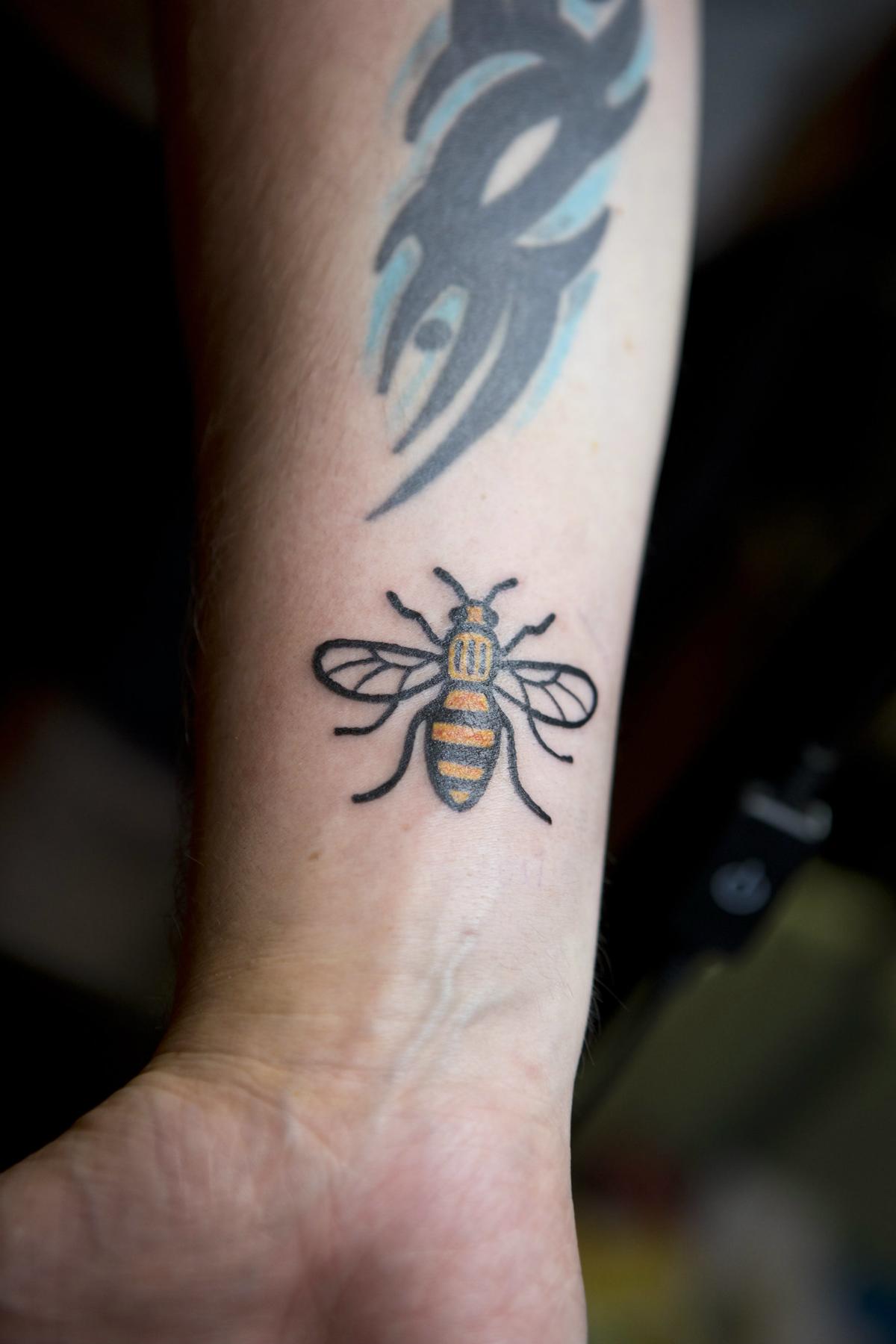 Ariana herself has the tattoo and is now officially an “Honorary Citizen of Manchester” after she returned to Manchester to make an emotional performance at a fundraising show just two weeks after the atrocity. Attended by more than 50,000 people, the event at Manchester’s Old Trafford Cricket Ground bridged musical divides and showed the world that terrorism could not divide the city or crush its party spirit.

Although significantly smaller than both London and Birmingham in size and population, Manchester claims to be the UK’s “second city” in terms of its culture, and it’s hard to argue with that. Musically, the city punches above its weight (this is the city of The Smiths, New Order, Oasis and a whole lot more), and its soccer teams (Manchester United and Manchester City) are among the biggest and best in the world.

The worker bee has long been a symbol of this friendly Northern city–it stems from Manchester’s key role in the 19th Century Industrial Revolution, when “busy bees” set to work at “hives of industry”–the mills and factories that now house apartments, bars, and nightclubs. Part of Manchester’s Coat of Arms, the bee brands city council buildings and even its trash cans, as well as being stamped onto the pavements of the Northern Quarter–Manchester’s bar-filled hipster headquarters.

Famed for its music scene, nightlife, and colorful mix of ethnicities, Manchester reacted with horror to an attack which seemed designed to destroy the sense of pan-religious community that is part of its cultural identity. The city had been hit by terrorism before–in 1996 the Provisional Irish Republican Army (IRA) detonated a lorry bomb and destroyed much of the city’s downtown shopping district. The IRA gave a 90-minute warning before the explosion, and nobody was killed. 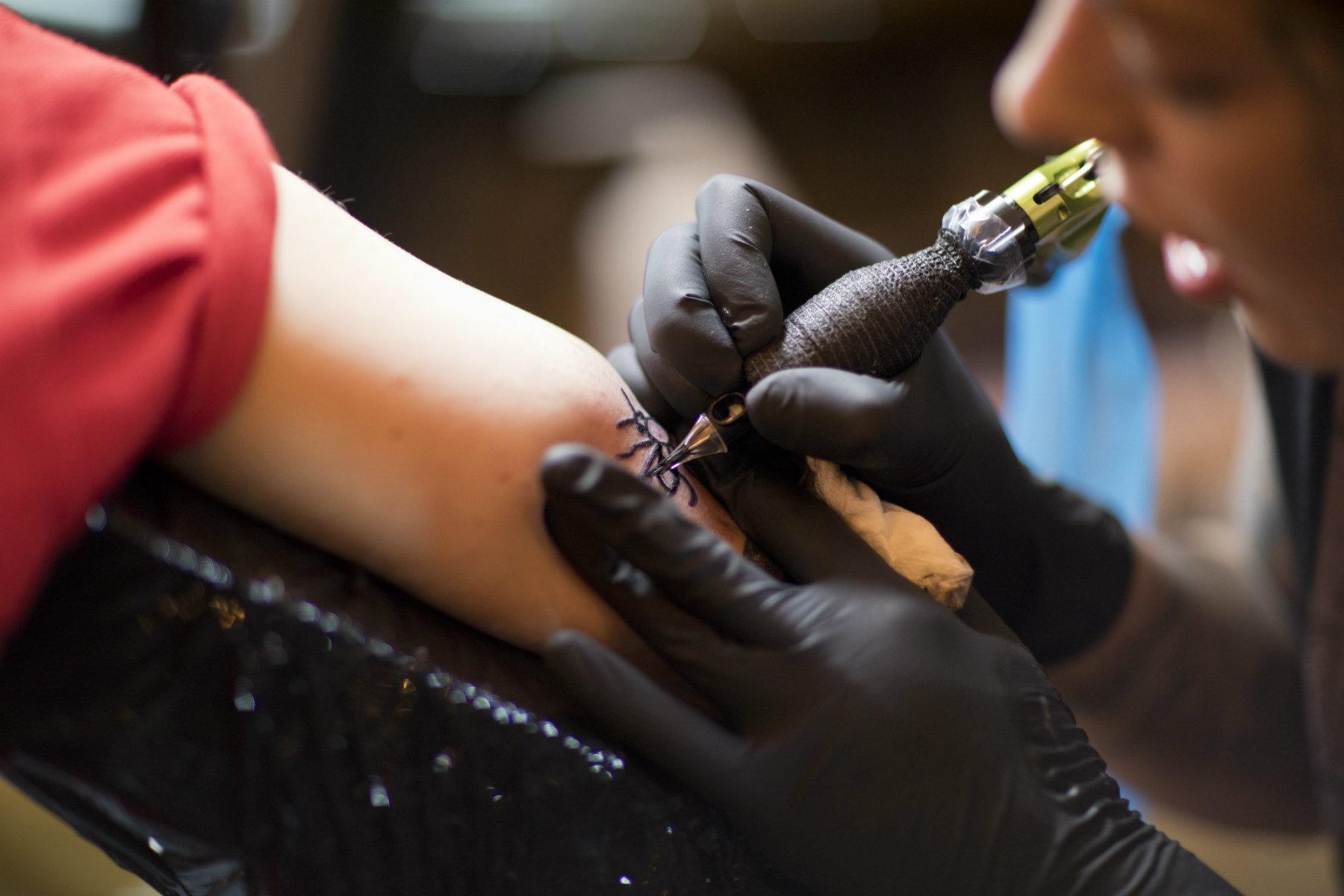 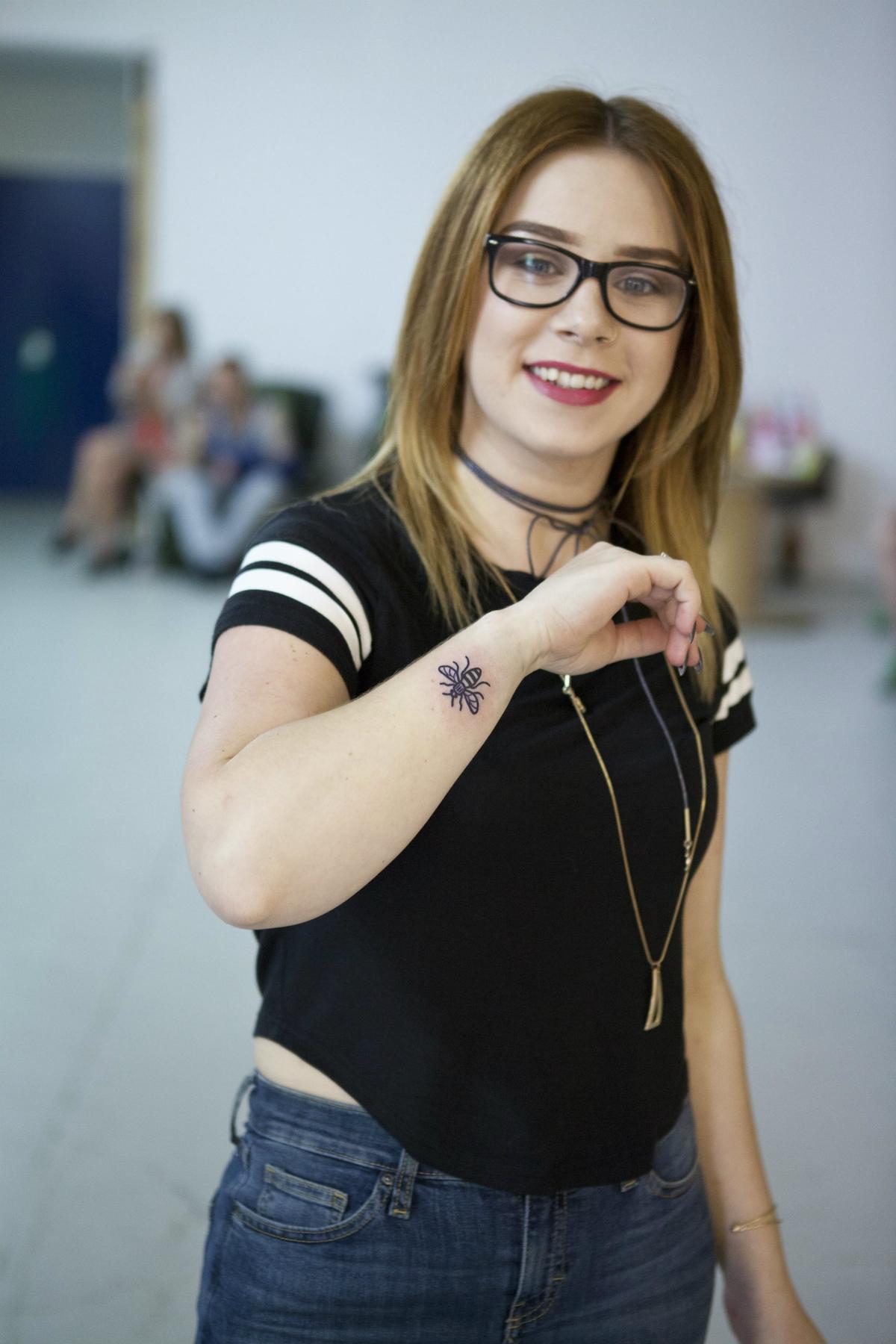 There was no warning on May 22, but Mancunians (or ‘Mancs’, as the locals often call themselves) responded with an impressive show of resilience and unity. People threw open their doors to help strangers, and people of all faiths and ethnicities came together in their thousands to lay flowers and to attend public ceremonies in front of the city’s imposing Neo-gothic town hall.

Wanting to do something to help raise funds as well as show the city’s strength in unity approach, local tattoo artist Sam Barber, came up with the Manchester Tattoo Appeal to raise money for those affected while creating “a lasting symbol of Manchester’s courage, strength and defiance.”

“I think the attack and others like it are designed to divide communities and stir up hatred between different sections of society, but Manchester stood together to defy those aims.”

The plan was for tattoo artists to spend one day tattooing as many bees as they could, working for free and providing all inks and supplies at their own expense. Those getting inked would pay the equivalent of around $65 to the appeal’s JustGiving page. The original aim was to raise £10,000 (around $13,400), between five Manchester studios. But tattoo artists at over 160 studios across the UK offered their services, raising almost £600,000 and inking thousands of people with the distinctive design. Mancunians across the world continued to get the design long after the appeal had ended, and their bee-inked numbers are set to swell even more, with plans for an annual bee tattoo fundraiser.

Adopted Mancunian Andy Jowett was among those who queued to get the bee. He said, “I came here to live as a student and, like many others, stayed on after university. I met my wife here and our daughter was born here. It’s our home.”

“As soon as I saw the Manchester Bee Tattoo appeal, I knew I wanted to be part of it. Most importantly, it would help to raise money for the families affected by the attack, but it was also a statement by the people of this city–that we’re not divided, we’re not going to go and hide. We’re not going to be afraid in our home.”

“I waited in line for about six hours to get my tattoo done with people from all walks of life from all over the city, all who had joined the hunt to find a shop with space to fit them in, such was the phenomenal response to the appeal. The day summed up the spirit of this city and its people in the face of atrocity: unity is strength.” 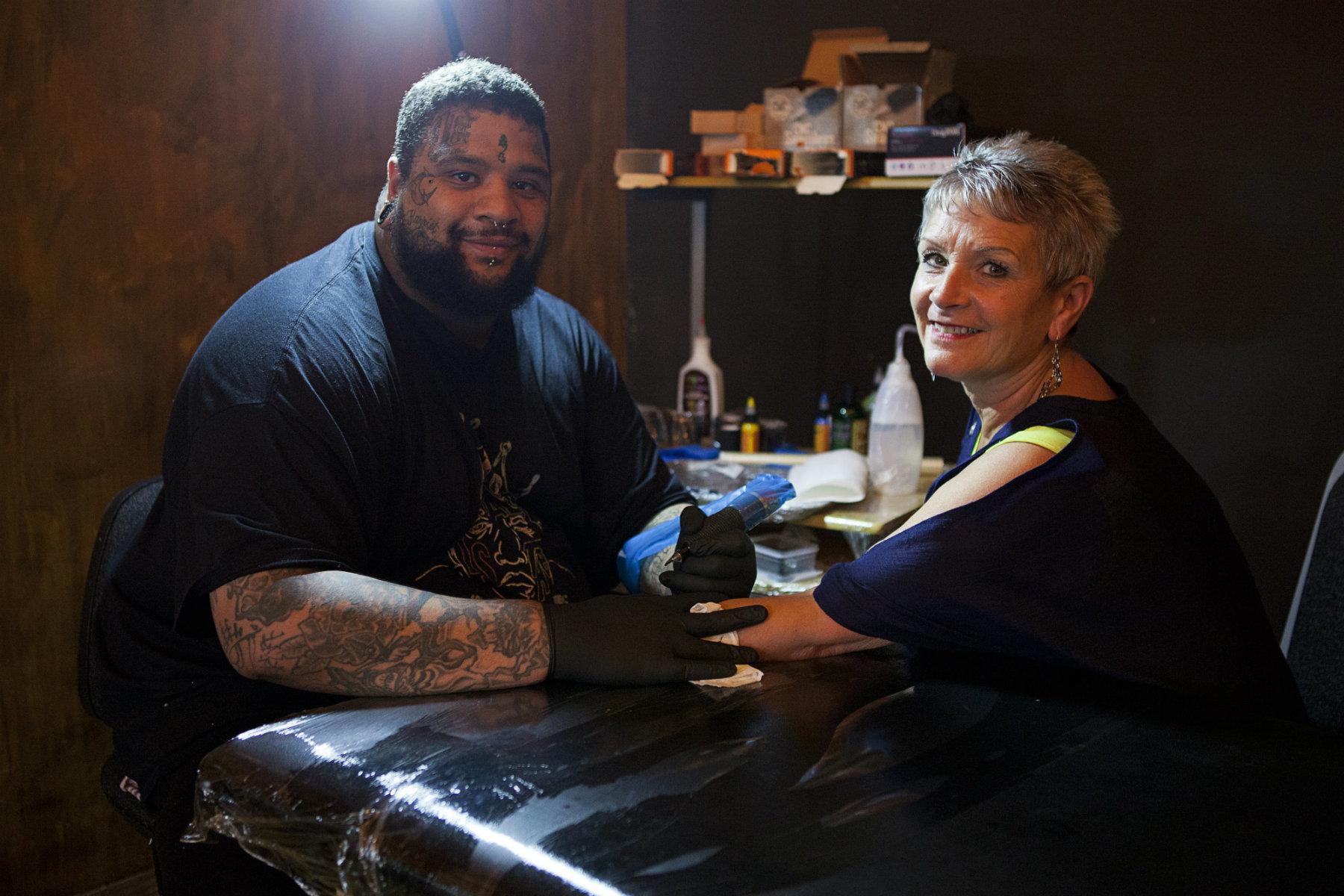 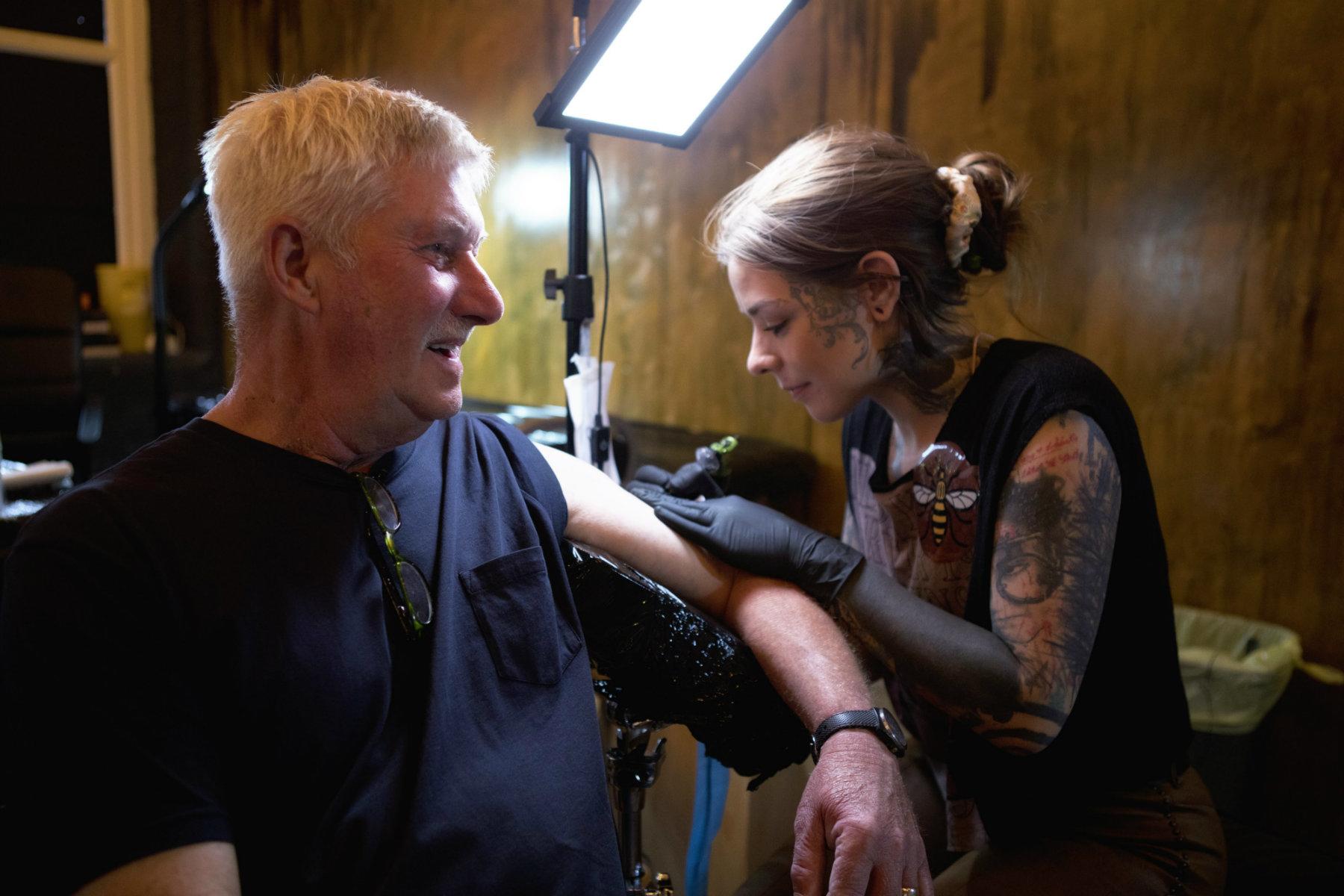 Keith Higgins is a born and bred Mancunian, a regular on the city’s live music circuit who works as a conductor on the city’s trains. The bee is his first tattoo. “To me, the tattoo is a tribute to all those who lost their lives or were injured in the attack, as well as the all those who helped out in the aftermath, including a number of my colleagues on the railway, who were some of the first on the scene.

“It was a great way to raise funds for the victims and families. The company I work for, Northern Rail, which runs Victoria Station nearby, also invited a tattoo artist in for any staff who wanted to contribute to the fundraising by having the tattoo. But most importantly, to me, the bee is a symbol of community and togetherness. I think the attack and others like it are designed to divide communities and stir up hatred between different sections of society, but Manchester stood together to defy those aims. I’m proud to have the bee tattoo as a lasting tribute to the unity and strength of our wonderful city.”

The 15 Most-Scenic Bike Trails in America

Send To A Friend